I bought this land one year ago. I have made here some establishments (a house) and then I built a fence around my garden. Well, while putting the fence the person representing the previous owner (of the land) helped me in doing that and during this time he made me put a few of the pillars more inside than I expected. The thing is there was no demarkation pillar previously, it got lost in some mysterious way.

So I got suspicious and wondered whether the person I mentioned above was depriving me of my rightful share of land in some tactical way. That’s when I decided to measure my land. I took measures of the four sides and the map of the land looks like following (all the numbers are in feet): 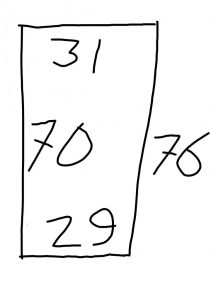 There should be 5 decimals (shotangsho) of land in it. For your information, 1 decimal or shotangsho I’m referring here is equal to almost 434 sq. feet. So 5 shotangsho land should be 5*434 = 2170 sq. feet approximately in size. Let’s measure it now, with all the knowledge that I have acquired from geometry and algebra. Here it is given that the angle between 70 and 29 feet sides is a right angle, but the one between 31 and 70 feet sides might not be. We redraw the picture and mark it like the way given below: 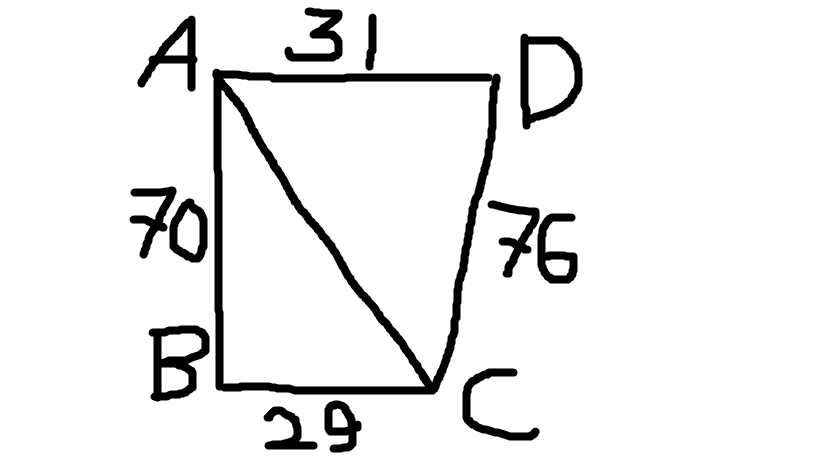 So the total area of my land is approximately = (1151.6 + 1015) = 2166.6 sq feet which is very close to 2170 sq. feet. Hence it may be concluded that there was no manipulation from the aforementioned representative while putting up the fence along the perimeter of my land.